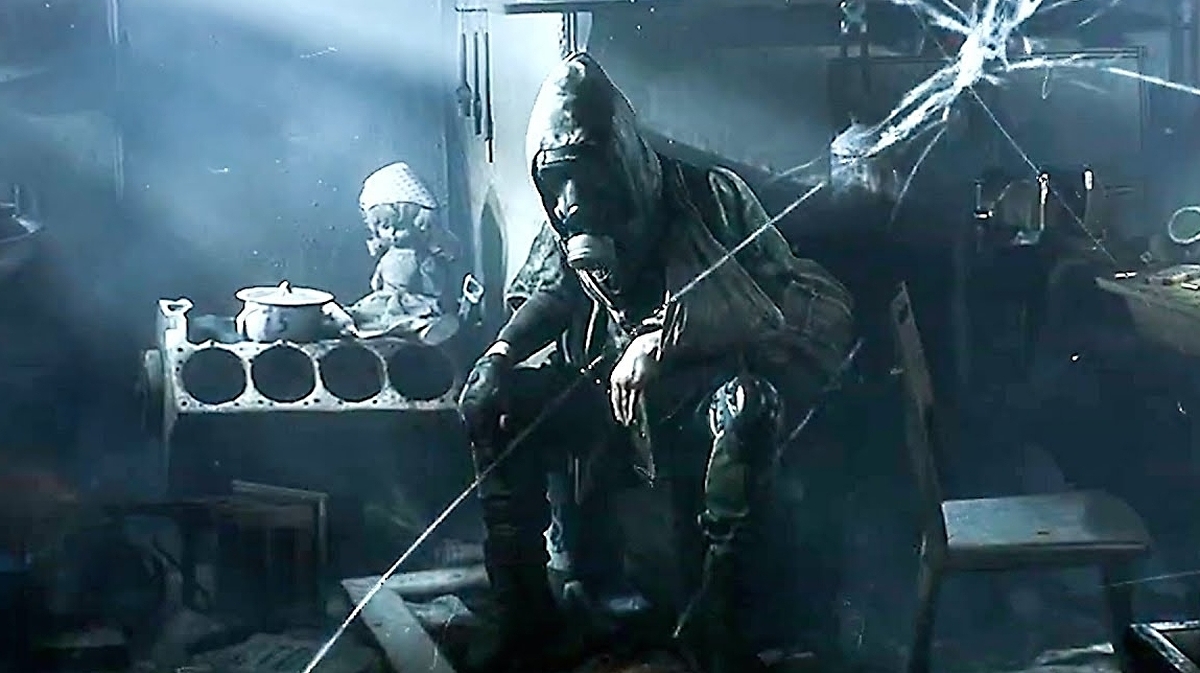 What is Chernobylite? This is a first-person shooter where the player as Professor Igor Khiminyuk will have to explore the city of Pripyat and its surroundings. The NAR group took control of the Chernobyl territory and is conducting secret experiments at the Chernobyl nuclear power plant. Igor will have to find out what is going on there and save his wife, who disappeared 30 years ago.

The best part of the story is the supporting characters. Everyone has their own character, manner of communication and ideals – and often their views do not coincide with those of other partners. But it is interesting to listen to dialogues with them, to learn more about them, hear references to our culture, such as mentions of “Mad Max”, Colonel Kurtz from “Apocalypse Now”, “Breaking Bad” and “Linus Basket Stardew Valley” so on. There are many such things here, and when you notice this, you involuntarily smile and understand that the project was not done in a vacuum, but tried to put a piece of our reality into Chernobylite.

But what the Polish developers failed to do was refrain from trying to put another anti-Soviet propaganda into the game. Moreover, it is not clear why they tried to insert it into the timing and thereby disrupted the pace of the story, translating it into a completely different channel. Suddenly, all the characters begin to talk about the fact that the Soviet government acted badly, destroyed its own people, kicked them out on May Day demonstrations, and so on in the text. This is all reminiscent of the HBO series “Chernobyl” – all the theses seem to be taken from there directly.

READ MORE:  5 Reasons Why Arizona Will Be A Must-Visit Destination In 2023

So it turns out that the Chernobylite script sags a lot in the middle. At first, it is a mysterious thriller, then everything slides into politics and the already familiar Polish anti-Soviet propaganda, and then turns into an action movie with infiltration into the enemy’s base and making decisions for a good ending. Which, by the way, did not disappoint – not a single development of events leaves the player with a nose and clearly explains the idea and essence.

To achieve the perfect ending, the player will have to make important decisions in each task. There are only a couple of elections per mission, and some chains can consist of three to five decisions. But there is no need to worry – if the main character dies, then he finds himself in another dimension, where there is an opportunity to change the consequences and events. This is how you manage to achieve a better ending without replaying the entire game from scratch. And it’s nice to experiment to see how certain characters behave.

Here lies the second drawback – there are only five territories for research! You can choose only one place for travel, and there is no free passage between the outskirts of Pripyat. The player is driven over the same locations countless times for 20 hours, and it gets boring. I also want to wage war with the NAR soldiers weakly – they shoot accurately, but it’s easy to run away from them.

Obviously, The Farm 51 and Green flame blade 5e was guided by the GSC Game World project and tried to convey the same atmosphere, the same entourage, the same moods. And they did it. It is interesting to just walk around the locations, observe the weather conditions, such as the Chernobyl Storm and the appearance of monsters. What missing was anomalies or changes in space, as in Tarkovsky’s Stalker or Roadside Picnic.

The shooter part was disappointing, but only in terms of aiming. The barrels sound realistic and loud, you can hear every sleeve falling to the ground and the twitching of the shutter. But there are problems with accurate firing. After a couple of single shots, the machine gun, shotgun or pistol begins to wobble as if Igor was taking alcohol intravenously at the same time. This is confusing and annoying.

Weapon modification pleases not only from an aesthetic, but also from a practical point of view. For example, I didn’t need an assault rifle, but I wanted to use long-range weapons. With the help of a special table for modifying the machine gun, it was possible to turn the AK-74 into a sniper rifle and kill enemies from afar. Let there are only five types of weapons, each serves for specific purposes.

Building up your base with new gadgets to create cool stuff doesn’t bother you. The player is not required to farm hundreds of mushrooms, herbs, electronic components and so on in the vicinity of Pripyat – even advanced Chernobyl buildings require a maximum of 10-15 resource units. As a result, I didn’t even have to engage in deliberate prey until the very end of the game. At the normal difficulty level, the most capacious container was packed to capacity with resources, and before the final mission, only railgun cartridges had to be crafted.

READ MORE:  Moving to Costa Rica? Here's Everything You Need to Know

Separately, I would like to discuss pumping. It is present nominally, improving the passive skills of Professor Himinyuk, such as increasing damage from a particular type of weapon, expanding inventory or increasing health. But here’s how it is designed – worthy of a “like”. In other games, the hero immediately learns a new skill on the spot, but in Chernobylite you have to really train.

If you take Chernobylite apart from similar projects, then this is a “strong average”, a game for a couple of evenings with an interesting script, written characters, as well as non-irritating creation of objects. And it is quite worth the money that the developers asked for it at the release of the full version – a lot of effort and soul was invested.

But if you dig deeper and refresh your memories, you see a tendency: The Farm 51 project has repeated “Stalker: Shadow of Chernobyl” in everything. A scenario about a “scientific conspiracy”, exploring the Exclusion Zone, communicating with cool characters, awkward shooting and deadly beauty – all this unites both games. If the Poles do not abandon their brainchild and try to modify Chernobylite, then STALKER 2 may start to be afraid of a competitor. In the meantime, he just smiles condescendingly.

The Ultimate Guide to Camping Gear

Stockholm, what to see: complete itinerary in the Swedish capital

What to see in Oman, a complete itinerary from the sea to the desert

Things to Consider Before Choosing a Restaurant Theme Concept

Same Day Movers: Who to Hire? An ultimate Guide

Make Your Trip Amazing by Picking Bike on rent in Pune

6 Beguiling Places that you must visit in Goa

How to easily move with flat rate movers near me

Why Hatchbacks Are Ideal For Family Rides

Moving to Costa Rica? Here’s Everything You Need to Know

5 Reasons Why You Need to Hire a Short-Term Rental Management Company?

Feeling Bored? 5 Things You Can Do In Sydney’s West